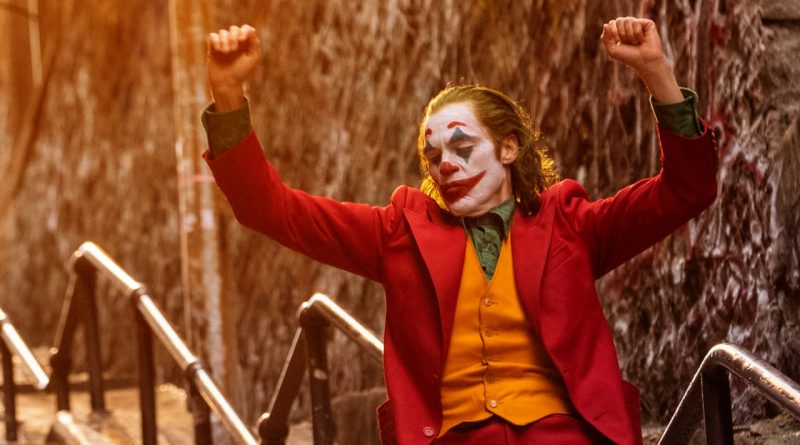 The Joker, one of the most iconic villains ever, has finally gotten his own movie. He has always been left out of the spotlight, outshone by the hero: Batman. But now he has a movie dedicated entirely to him and his origin story.

The movie Joker, which released October 4, stars Joaquin Phoenix as a mentally damaged clown in the slums of Gotham City who aspires to be a great comedian. Phoenix’s excellent performance allows the movie-goer to relate to the Joker, Arthur Fleck, and understand his mental issues.

Arthur suffers chiefly from Pseudobulbar Affect, a condition that causes him to laugh at very inopportune times. He also has delusions throughout the movie that really shows the viewer that the story is from his eyes, and to not trust everything that goes on screen, due to it being a fabrication or an exaggeration. Slowly and surely throughout the movie, Arthur goes increasingly insane. This leads to him dressing up in a full clown costume and completing his transformation into Joker.

What this movie does different is that Joker is separate from Batman. This takes place when Batman is a young kid before the murder of his parents. Instead, the movie’s hero is a mentally ill loner living in a society that abandons him and treats him like trash that puts him over the edge. It’s been a long held belief that Joker was birthed because of Batman, but with new retelling of his story, his creation is far more sinister. Instead of a vat of chemicals, it’s one bad day to push a man on the path of insanity. It’s truly a scary thing to think about.

The Joker is like many people at the start of the movie. Like a Tower of Jenga, little by little, his life is weakened to the point where it collapses to create an insidious new identity. Arthur has a tough, low paying career, no true friends to talk to, the burden of taking care of his mother, no social worker, no more medication, scarred from bullying throughout his life. The last straw for him is when he puts himself out there to try and fulfill his dream of being a comedian. When he fails, the clip is shown throughout Gotham on his favorite TV show. He looks up to Murray Franklin, the host of the show, as a father figure. With him making fun of his failed comedic routine, that is what causes him to become the Joker.

The movie received positive reviews, but also caused concern. Many believe the movie, featuring a poor, white male who becomes a villain, will encourage those in similar situations to do the same. They worry that, for lack of a better word, “losers” will see the Joker as encouragement to act on their desires, committing heinous crimes. With the current rise in shootings of all kinds, this is an understandable concern.

However, we disagree with the idea that this movie will encourage shootings. If anything, Joker raises awareness for mental health and poverty, showing that the government needs to assist those in need. If the government doesn’t provide aid for those individuals, who will?

Overall, this movie humanizes the Joker, establishing him as a real person with a real story, not just a psychopath with no emotions. He is a product of a society that didn’t care enough about him and others like him, leading him to lose it and become the villain.