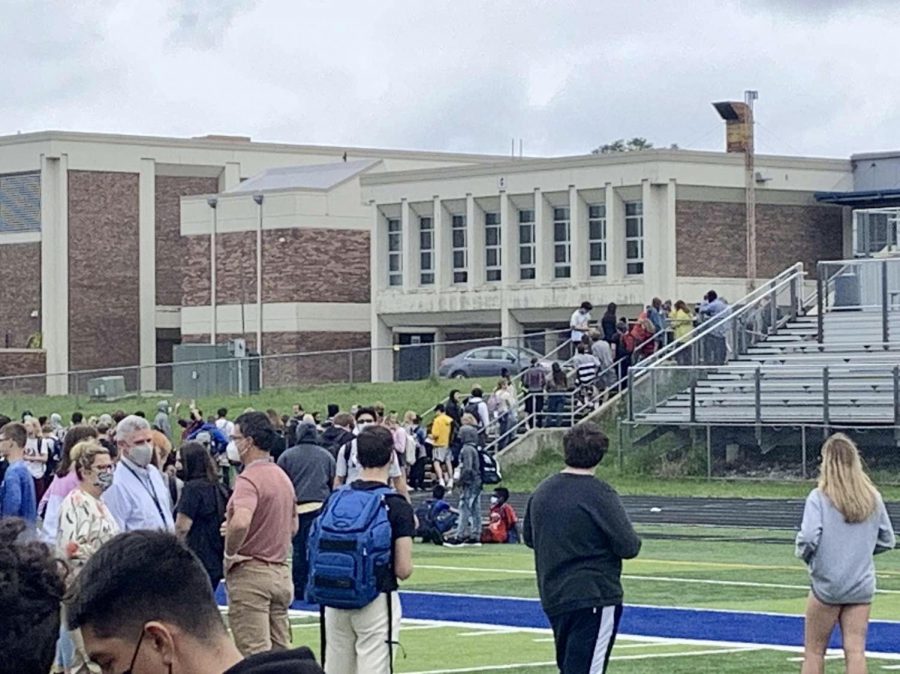 Four Fayette County high schools evacuated due to a bomb threat that involved a $500,000 ransom to a Bitcoin account, the threat made via the STOP tip line on September 21. HC, Paul Laurence Dunbar, Frederick Douglass, and Lafayette high schools were ordered to evacuate the buildings.

At HC, Principal Paul Little announced at approximately 12:27 pm for all students in the cafeteria to report to their fourth period classes and then follow the evacuation plan.

“[Dr. Allen] said to throw away your lunch and go to your fourth hour,” HC sophomore Diego Sanchez said. “He also said it wasn’t a drill. So, I grabbed all the cookies and left.”

After the evacuation, all students across the FCPS high schools started sharing social media posts about the situation. This caused even more confusion among students because of the misinformation being spread.

At 12:43 pm, FCPS sent out an alert to families stating “FDHS, HCHS, LHS, PLDHS have been evacuated following bomb threats. Officers are inspecting the buildings. Updates will follow.”

Many students called their families informing them of the  situation. Students then got called for dismissal and formed a line down the width of the football field. Students also were looking to their instructors, waiting for information.

“I wish there was more information sent to us as it happened,”  HC teacher Pablo Brown said. “We were standing [on the field] and kids [were asking us questions]. All we could tell them was ‘you know what I know.’ I wish we practiced the evacuation drills once a year so everyone would know what to do.”

Shortly after, HC students were told that they were not allowed to go back into the building and students who drove were not permitted to drive their own cars home.

The Lexington Police Intelligence Unit and the FBI believe that the threat was made outside of Fayette County.

“There is no room for error when it comes to the health and safety of our students and staff,” FCPS Superintendent Demetrus Liggins shared in a live stream. “Our schools have emergency plans in place for situations like this and respond appropriately.”

At 3:30pm, teachers met in the gymnasium for a debriefing of the situation presented by the officers. Officers told faculty members that it seemed to be a legitimate threat. Officers also said that teachers were not allowed to go back into their classrooms because the bomb-sniffing dogs had not yet cleared the building. The canines did not arrive until later in the evening.

“The students, faculty, and staff at Henry Clay High School remained calm during an evacuation because of a bomb threat, and everyone on campus worked together to ensure the safety of all,” Little said in an email sent out to FCPS families at 4:45pm. “I want to thank all for a job well done.”